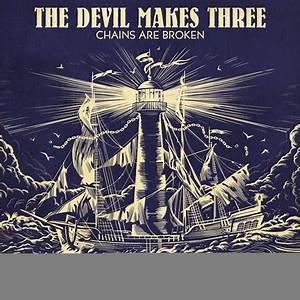 Right of the bat, the addition of producer Ted Hutt who has knob twirled for Dropkick Murphy’s, The Gaslight Anthem, and The Mighty Mighty Bosstones is paying major dividends. The production value is top notch as the band sings of redemption and ruin against a Western Noir backdrop that captives and sucks you in. There is an early Byrds echo throughout the record with some heavy Ryan Adams influence.

The song “Paint My Face” is a song that captures all that is good with this band and their own unique style of Americana. The 60’s jangle guitar flows effortlessly into three piece harmonies that caress the song perfectly, and “All Is Quiet” is a slow burn stunner of a song.

The new record represents a bit more of a sophisticated approach for the band with the addition of Stefan Amidon to make them an official three piece band, hence the name. The change and more polished sound may not put the band in favor with some of their ardent fans that are used to their ramshackle live shows, but heck, even The Replacements had to grow up.

The real beauty of this record is the way that the band weaves different styles and tempos into eleven songs that fit perfectly as a whole and also stand individually as individual artistic entities. Just listen to “Castles” and you will see the light.

The Roots Rock group The Devil Makes Three has another record coming out on August 24th, The Chains Are Broken.