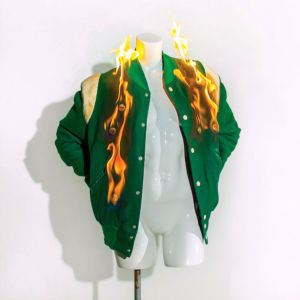 When Foxy Shazam came out with The Church of Rock and Roll in 2012 it was almost as if our Rock and Roll Dreams had been answered. Bringing over-the-topness back to Rock and Roll and pushing the envelope to the extreme with the bombast of “Holy Touch” and the otherworldly wail of the title track, throwing down Glam, Pomp, and a whole lot of audacity, it looked for one flicker of a moment that the devil spawn of Freddie Mercury had finally been born, and the race with the devil was headed to the Sunset Strip circa 1987. Until that is, Eric Nally and the band crashed and burned in ways that would have made The New York Dolls blush.

That’s why their latest record Burn is such a treat to the ears. The high camp is still front and center, albeit turned down to levels normal humans can endure, and from the lead-off title track it is clear that this rebooted version of the band that channels Mick Jagger, James Brown, and Justin Hawkins from The Darkness is pressing forward with fairly straightforward Pop anthems with a swashbuckling style that is more Three Musketeers than Pirates of the Caribbean. And that is a very good thing.

The Song “Dreamer” is early Queen by way of Supertramp, “In My Mind” has a bit of Bruno Mars Mojo to it, “Doomed” somehow rhymes china and vagina without and it actually works, and the auto-tuned close “Into The Wild” does take a wide left turn but ends up to be trippy instead of entirely offense to the years.

In short, from what these band of renegades delivered with this album, they might be one record away from creating their opus.