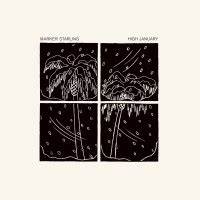 There is a certain ’70s singer-songwriter pathos to just about every song on this latest release from Marker Starling, also known as keyboardist vocalist Chris A. Cummings. The stark and enveloping Bedroom Pop on this record not only transforms you into a bubble of butterfly ribbons but also lays you down in a field of Steely Dan and Todd Rundgren influenced musical Nuggets. “Starved For Glamour” could have been on a deluxe edition of Aja, and “A Little Joy” is tailor-made for inclusion on an early-era America record. Produced by Sean O’Hagen of The High Llamas, High January is a fully formed full-band affair giving the proceedings a warm feeling made, even more, intoxicating with the presence of Laetitia Sadler classing up the joint on guest vocals.

The song structures and the use of vintage instruments in the production process only prove to enhance the vintage AOR vibe of the record. If anything is wrong with this album it would be the sameness that starts to creep in around the twenty-minute mark or so. The vocals aren’t overly active, maintaining the same mellowness for most of the 34 minutes. But, if you are looking for a kick-back sort of listening experience while you knock down a couple of Bombay Saphire martinis then this just might be your escapist jam.