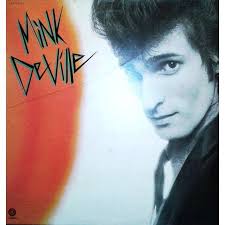 A Bernie Sparrow review originally published on The Cool Album of the Day website. For more reviews like this make sure to check them out.

Willy DeVille is a rock star. Just look at him.  If you saw Bryan Adams or Elvis Costello walking down the street they could be mistaken for a mechanic, college professor, or accountant, certainly not for rock stars. But Willy

Deville, looking like a slightly less road worn version of Keith Richards with a few less battle scars, could only be mistaken for the front man for the seminal post-punk band Mink DeVille and a rock star of highest order of which he is both.

Willy Deville was a product of the 60’s, from the West Village New York City. Very much influenced by the urban street scenes of his youth the young Willy grew up listening to Fred Neil, street Doo-Wop group groups, Motown, Phil Spector records, as well as Stax soul sounds, Simon and Garfunkel harmonies along with a vast rainbow of street sounds he absorbed growing up in  this urban environment.

Billing himself and his band as Mink Deville, Willy soon became a fixture at the famed CBGB’s night club that gave birth to the Ramones, Blondie, The New York Dolls, as well as a host of other iconic musical artists that were largely responsible for bringing that punk, softened just a bit to appeal to the general public, sensibility that would become hugely popular.

With the release of his debut album Cabretta in 1977, the Rock Star very quickly established himself as a force to be reckoned with Rolling Stone reviewing the album by saying “Cabretta is one of the best albums of the year, with the charm of its’ popular rock &roll urban rhythm and blues of the 50’s and 60’s, between The Drifters and Phil Spector.”

That Phil Spector sound was largely created by Jack Nietzsche, the arranger back in the “Wall of Sound” days that was the producer of the album, and the rest was from the musical collage of sounds that Willy absorbed from his youth.

The record just oozes cool with every track starting

effectively with the opening track “Venus of Avenue D” that would have been a great Velvet Underground song with a daring street snarl, and danger lurking around every corner saxophone serving to set the urban mood. We are told that The Venus of Avenue D is the queen of his block, and who are we to argue?

We walk further down the musical street and run into “Little Girl” that is a straight on Phil Spector girl-group inspired song that could have been the B side of “Leader of the Pack”, and “Mixed Up, Shook Up Girl” is a piano based, bongo and maraca’s exquisitely sounding song that showcases the range in DeVille’s voice along with his skill in delicately turning a phrase and changing tempo at will.

“Gunslinger” is another punk influenced song from the Lou Reed urban songbook, and “Cadillac Walk” is one of my desert island songs with a distinct Dire Straits on uppers feel to it. And the coolness continues.

The true diamond in this sea of jewels is “Spanish Stroll”.  DeVille lowers his register a little bit here throws in a bit of Mariachi Spanish influence, and delivers a tour de force story of Mr. Jim with his finger on his eyebrow and left hand on his hip, he’s such a lady killer’ he thinks he’s so slick, and of course, he does the Spanish Stroll.

I won’t even tell you anything about the last two songs on the record.  By the song titles alone, “She’s So Tough” and “Party Girls” you inherently know they are good. And they are, extraordinarily so.

Willy Deville went on to record seven critically admired yet criminally ignored albums under his own name, including Miracle with side-man and producer Mark Knopfler, as well as five additional records with Mink Deville.

The “Rock Star” Willy Deville passed  away in 2009 due to complications from pancreatic cancer after doctors discovered it after providing the musician treatments for hepatitis –C. He was 58 years old.

Always the pragmatic optimist Willy was ultimately realistic about his legacy.  When considering how he would be viewed after his death he told an interviewer “I have a theory.  I know that I’ll sell more records when I’m dead.  It isn’t very pleasant, but I have to get used to the idea.”

A music critic also wrote, “Willy DeVille is America’s loss even if America doesn’t know it yet.”

I’m not sure that truer words have ever been spoken.

Unless otherwise noted, all songs by Willy DeVille.

Listen to the full album below