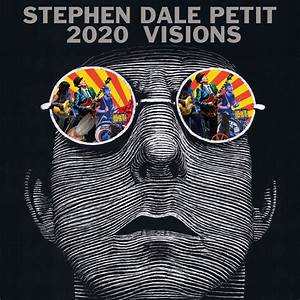 It seems that California based guitar player Stephen Dale Petit has waited for his entire career to produce this record that is a mini-masterpiece and a master class in what modern Blues Rock should be, and where it is headed. And this, complete with album artwork from Klaus Voorman, the artist who created The Beatles’ Revolver cover, is, by all accounts, his own personal best and has the potential for Grammy consideration in the Blues category. Joe Bonamassa may get all the press these days, But this guitar slinger that has already made a name for himself on the other side of the pond can easily stand fret for fret with his idol.

With about as diverse a palet of songs as you will find, every Blues nugget presented here stands alone. One second the sonic wonder of Stevie Ray hits you between the ears on “Tinderbox,” and in the next breath all hell breaks loose with the snarling Clash influenced title track on “2020 Visions.” The nuanced slow burn of “The Ending of the End” brings to mind both Kings, Freddie and B.B., and “Steppin’ Out” would hold up quite spectacularly at the crossroads battling it out with the devil for the soul of the song.

Anthems are not left out of the mix, and “Soul of a Man,” a song that features Shemekia Copeland, shares a lot of DNA with “Beds are Burning” and will be a call and response staple on the festival circuit this year. If there is a festival circuit this year, that is. There are no throwaway tunes on this one. “Zombie Train” may be the weakest of the lot, not surprising given the song title, but beyond that, this album is a real page-turner. Stay with all nine minutes of “The Fall of America” churning, burning apocalypse-blues plays as legit at it can get.