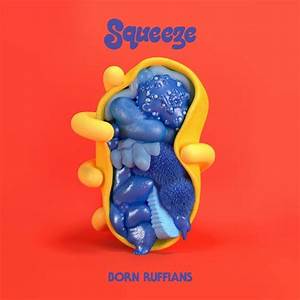 It’s not often, and actually, it’s pretty cool when a band will deliver two extremely listenable Power Pop gems a scant 6 months from each other and deliver this strongly on both fronts. And, Power Pop mavens Born Ruffians have done just that. After having put together enough material for multiple records, at the bare minimum a double album, the band chose to follow up their April release Juice with this October digital-only follow-up effort, Squeeze.

From the opening track, “Sentimental Saddle,” a song that takes you on a semi-psychedelic journey swirling left-turns aplenty with Crazy Horse worthy harmonica escapades, swirling keyboards, and layered harmonies topped off with Beach Boys Holland influences on the back-end, the trip that lies ahead can be nothing but groovy. And It Is.

“30th Century War” has sort of a Kinks by way of The Talking Heads feel to it, the song “Waylaid” features Hannah Georgas on vocals is a solid bass line driven Indie Rock song, and “Sinking Ships” is anthemic in all the right places and is a centerpiece of the record.

There is a pure Pop super-sheen on the earworm-worthy “Rainbow Superfriends” that will stick with you long after your first listen, and the festival-ready “Noodle Soup” goes a bit deeper in understanding the need to take care of each other.

This record is everything you would want in an album that provides a solid listen. Songs with a message, pop-hooks abounding, and enough varied textures and turns to make you want to go to the listening well more deeply with each subsequent listen.