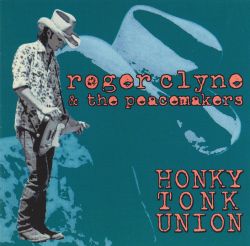 Not Country, and with only small sawdust dustings of Honky Tonk, the debut record from Roger Clyne & The Peacemakers, a band formed from the ashes of the Refreshments, the Gin Blossoms, and Dead Hot Workshop, is Roots Rock of the highest order bringing to mind John Mellencamp, Bruce Springsteen, and Tom Petty. Or, think of them as a bit of a less ramshackle version of the Old ’97s.

The approach to Cowboy Rock that these guys put forth has just enough twang to catch the ear of Dwight Yoakam, Just enough jangle and songwriting chops to impress fans of Chuck Prophet and his band Green on Red, and David Lindley devotees will be quite impressed with the delicately played mariachi Southwest-Noir stylings.

The title track will drift you down South of the border, and “My Heart is a UFO” is a tearjerker that the Replacements could have covered quite nicely, and “Beautiful Disaster sounds like Born to Run’s younger brother. It is a little bit ear-scratching that this band is not as well known as The Blasters, The Bottle Rockets, or Whiskeytown, but there still is a lot of time.