If you have not heard the news rock is not dead, and the demise of good old barn burning Rock and Roll has been extremely exaggerated. Here are our top five singles worthy of checking out to increase your musical street cred.

These hard-driving all-female Swedish rockers delivered their stellar record, Heat Wave, carrying a ’70s rock groove that can stand fret for fret with any of their male counterparts. The lead-off single “Driving In Style” will take you pedal to the metal down to the parts of your subconscious that you have not visited in a very long time.

It’s no secret that we love Luke Spiller and the Struts. In fact, their new record, Strange Days, would have been our record of the year were it not for the fact that Robbie Williams appears on the single, and we will have none of that. Here, on the appropriately named “Cool” the most dynamic frontman in the game today struts his stuff in a fine fashion.

Another fine band with a female rocker leading the way, this time courtesy of Mirjam Sieben, the vibe is pure AC/DC by way of Joan Jett and the Blackhearts. With this ode to blasting past the last call at your local bar, or these days in your living room, and letting things rip you can start your own countdown to ecstasy.

Another Born to Be Wild jump on your Harley and ride hard groover of a tune. You will grow a mullet just listening to this one.

As groove-laden a rocker as you are likely to come across in recent months, these Scottish rockers will make you miss putting a couple more tokens in your local’s jukebox just to make the night last a little bit longer. 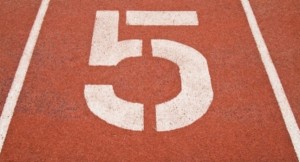 Things are kickin’ on the music front this week. Plenty of musicians have released songs into the atmosphere in advance of albums to be released in the next 45 days or so, there are a lot of pandemic-centric tunes hitting the streets, and old favorites are reminding us why they are great.

Sir Elton continues to dribble songs we have not previously heard, this time with “Here’s to the Next Time” a song that was originally written with Bernie Taupin in 1967 from his recently released Jewels E.P.

Lana Del Rey takes things low and mostly slow with her ode to lovemaking with “Love Me Like A Woman.”

And, Rock is the New Roll favorite Dave Alvin is back, front and center with a scorching version of Highway 61 Revisited in his own unique Roots Rock fashion.

Here are five really cool records our ears are getting jiggy with this week.

Ears, down our favorite real and true Rock and Roll band in the last five years, Luke Spiller along with his band The Struts are back and as Glam-fastic as ever. Wearing the Queen, Def Leppard, and AC/DC crown with honor, this new record dials down the showmanship and dials up the guitar riffs most noticeably on “Cool” and “Wild Child,” a song that features Tom Morello. This is a band that is maturing before our very ears, heck they even throw in an “Angie” style ballad that is part Rolling Stones and part Black Crowes. Strap your ears on and enjoy. Just start on song number two and skip the title track that features Robbie Williams. But the literal call-in from Def Leppard’s Joe Eliot on “I Hate How Much I Want You” on the chorus is wicked fun.

One of our favorite bands of recent vintage has released one of our favorite records of the year. Becoming known as one of the bands on President Obama’s personal playlist as well as for their incendiary live shows and over the top quarantine sessions, Andrew Weiner and his bandmates are delivering piano rock to the masses the likes of which we haven’t seen since the early Leon Russell days. Favorites are sprinkled all over this thing with standouts that include the title track, the slow burn of “Help Me,” a song we all need to help us hang in there during troubled times, and the almost Dawes evoking “Take A Little Ride Downtown.” This is a terrific set of tunes that deserve to have more ears sent their way.

Taking a walk on the Jazzy side of the fence, the great Flautist Herbie Mann is out with the greatest hits package that is perfect for the Jazz aficionado, lovers of the mojo vibe of the ’60s, or just folks that like great music in general. Spit polished with enhanced quality versions of the classics, every song on this one is a classic must-hear magic carpet ride. Not quite like the originals in some cases, there are several versions and renditions on this that feature vocalists including Tamiko Jones on “A Man and a Woman,” Carmen McRae on “Live For Life,”  and Cissy Houston on Cajun Moon. The song “Push Push Pt. 1” presented here is worth the price of admission alone and “Respect Yourself” is perfectly sublime.

With more hooks than an episode of Dangerous Catch Canadian Pop-Funk outfit Seaway offers up an anthemic brand of Festival Rock that is as exuberant as it is hooky. The ’80’s Power Pop influences are floating around this one for sure, but ’90’s Indie-Punk in the Green Day mold may be a better touchpoint.” Still Blue” is a festival-ready, if festivals ever become a thing again, romper, “Sweet Sugar” takes things a bit slower and even has a scent of The Cars, and “Peach” could easily have been an ’80s Cheap Trick tune. This one is the ’80’s Teen movie soundtrack from a film that was never made.

Joey Molland – Be True To Yourself

As the sole remaining member of Badfinger and 1 of only 2 members of the band that did not commit suicide, Pete Ham died in 1975 and Tom Evans passed away in 1983, Joey Molland is keeping the spirit of one of the best Power Pop Bands ever to strum a chord very much alive in 2020. Lush and Beatlesque to the core, just like Badfinger, this record is a bit of a throw-back with a lot of present-day spit and polish thrown in for good measure. Produced by Mark Hudson, of the Hudson Brothers’ fame along with serving as part of The Boneyard Boys a group of songwriters that wrote a bunch of the latter-day Aerosmith hits, Hudson produced records for Neil Diamond and Ringo Starr among others. An extremely likable listen,  there are elements of Ringo and George Harrison solo efforts here as well as a whiff of Jeff Lynn and Electric Light Orchestra thrown in for good measure. “Better Tomorrow” is a G. Harrison inspired highlight as is the E.L.O. measured tones of “All I Want To Do.”

We certainly can’t have Badfinger Back, but mad props to an artist that had gone through hell and back again for the sake of his art.

Quarantine, Riots, Politics, Civil Unrest, there are a lot of crazy things going on in the world so much so that we need music in our lives now more than ever. Here are five tunes designed to float the mind, soothe the soul, and sail away on that mystery ship.

This new-school Texas Troubadour ha a goal in mind to make the world a better place one song at a time. Here, he asks that we don’t change his Rock & Roll as he namechecks many of the albums that are in most of our libraries. From Purple Rain, Private Dancer, Who’s Next, Hunky Dory and beyond. This is a fun as hell listen that will bring back a lot of memories.

The Struts – Another Hit Of Showmanship

Our favorite Rock is not dead du jour, The Struts and Luke Spiller are out with another belter of an anthem. Here’s hoping that they will be starting a new record in the very near future.

Mike Scott and his Waterboys are in fine form this up-tempo song loosely tributing James Brown.

Riding on the slightly harder rock side of the fence The Middlenight Men provides raucous Rock and Roll with inter-changing lead vocals and one hell of a hook and groovy chorus. Looking forward to seeing what these guys have in store for the future.

These guys come to you direct from Scotland tailor-made for the festival curcuit, should there ever be one again.

Tom Morello Joins Luke Spiller and the boys for a fiery rendition of the Bruce Springsteen classic.

Sorry Greta Van Fleet, the Struts are the best Rock and Roll band on the planet right now. Dispensing with their Queen frocks for a song they bring Tom Morello on stage for as scorching a version of Springsteen’s “Dancing in the Dark.”

Pound for pound our favorite new band. These guys get it. Great music chops, cool image, and they are starting to build a stable of videos to complement an already ready for prime time all around package. Here is their latest video.

Memo to The Struts. You don’t need Kesha to sex up your image as one of the coolest Rock and Roll bands on the planet. On second thought, this video is pretty damn cool.

The latest from the Retro Glam band The Struts. Everything about this song is cool!

“Body Talks” the first single from the upcoming album from The Struts is a scorcher and front man Luke Spiller is one of the most dynamic singers in Rock and Roll today. A bit over the top for sure but this band of retro rockers should be poised to take over the world any time now.